I watch a lot of martial arts videos online.  I’m always on the lookout for new drills or insights into techniques and concepts.  I’ll watch just about anything having to do with fighting: boxing, BJJ, kali, silat, muay thai, dumog, sikaran, sambo, stick and knife videos.  The list goes on.  There’s a topic that I don’t see covered nearly enough (my opinion, of course), and that is compression locks.  I suppose that many grappling schools refrain from teaching them to lower ranks for fear that they might hurt someone in practice.  This is evidenced by the fact that the rules on usgrappling.com prohibit compression locks for anyone other than brown and black belts.  Since I lean more towards self-defense than competition, I’ll teach just about any technique to someone of any level that can provide an advantage for them in a fight, including compression locks.

I love compression locks.  Just ask any of my students.  They often have the (mis)fortune of being of the receiving end of my demo techniques.  I’ll slip a compression lock into a series of moves, which will inevitably evoke a drastic reaction out of the recipient.  Then that recipient has to have the move done to them another three or four times so everyone can pick up on the nuances of the technique.  (I do feel bad about that…but how else are they going to learn?!)

Now, in case you’re not hip to the hotness that is compression locks, let me provide a definition.  From Wikipedia, “A compression lock, a muscle lock, muscle slicer or muscle crusher, is a grappling hold which causes severe pain by pressing a muscle into a bone.”  The Wikipedia article then goes into all the gory/awesome details of what kind of damage compression locks can do.

There are several things that I like, in particular, about compression locks.  First, they work better on people with bigger muscles.  So they’re a bit of an equalizer.  Second, they are often available when someone defends against a regular joint lock.  Third, they are easier to apply if you have really bony forearms and shins, which I do.

Ankle Lock
Now, there is one compression lock that is popular.  That is the straight ankle lock. 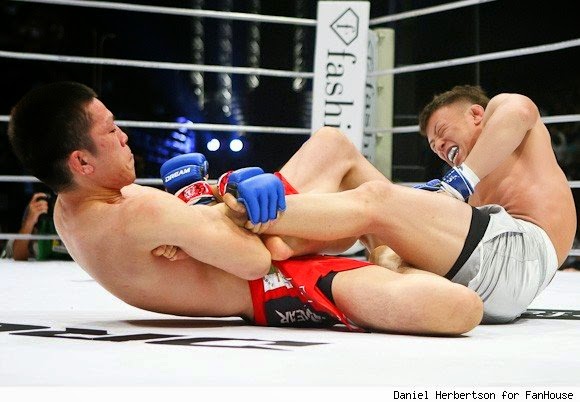 Technically, the pain first comes from the radial bone crushing the Achilles tendon against the fibula bone.  In my experience though, the person taps out because of the pain of the ankle hyperextending, which is a regular joint lock.  (Unless of course, the person isn’t willing to suffer through the pain of their tendon being crushed.  Then they tap right away.  But in competitions or when your training partner is the dojo jerk that thinks every drill is a life or death war and refuses to tap, they wait until the ankle feels like it’s going to pop out of socket.  While I’m thinking of it, here’s a public service announcement: Don’t be a dojo jerk.  Just because you can power through something doesn’t mean that it’s good to do so.  More often than not, you’re being a bad training partner, and you’re also reducing the longevity with which you will be able to train…because you will force your training partners to go full force, every time.  Injury city.  Population: you)


There are literally so many ways to do a bicep slicer that I couldn’t possibly list them all here.  I will cover several of them to give you some ideas though.

Calf Slicer
There are a number of ways to get to a calf slicer.  The mechanics are essentially the same as the bicep slicer.  This tends to be a ground move, but I've pulled it off at least once in sparring while both me and my opponent were standing up.


Deltoid Crusher? (I don't know the official name of this one)
This is a compression lock that I've seen in Kali and Silat circles and not so much with the BJJ crowd.  It requires either more finesse or a nice diminishing attack to pull off, but luckily getting an eye shot on the way to setting it up is quite natural.  I like to do this from (what I've heard called) a reverse split entry, which is where your outside arm goes to the inside and the inside arm goes to the outside, which is a lot less awkward than it sounds.

This lock is admittedly a fair bit different than the "slicers" but it's a muscle crusher just the same.  It either puts the guy on his knees or his attempted escape leads right into a puter kepala takedown.

Rather than break down each of the techniques above, I'll just focus on one. 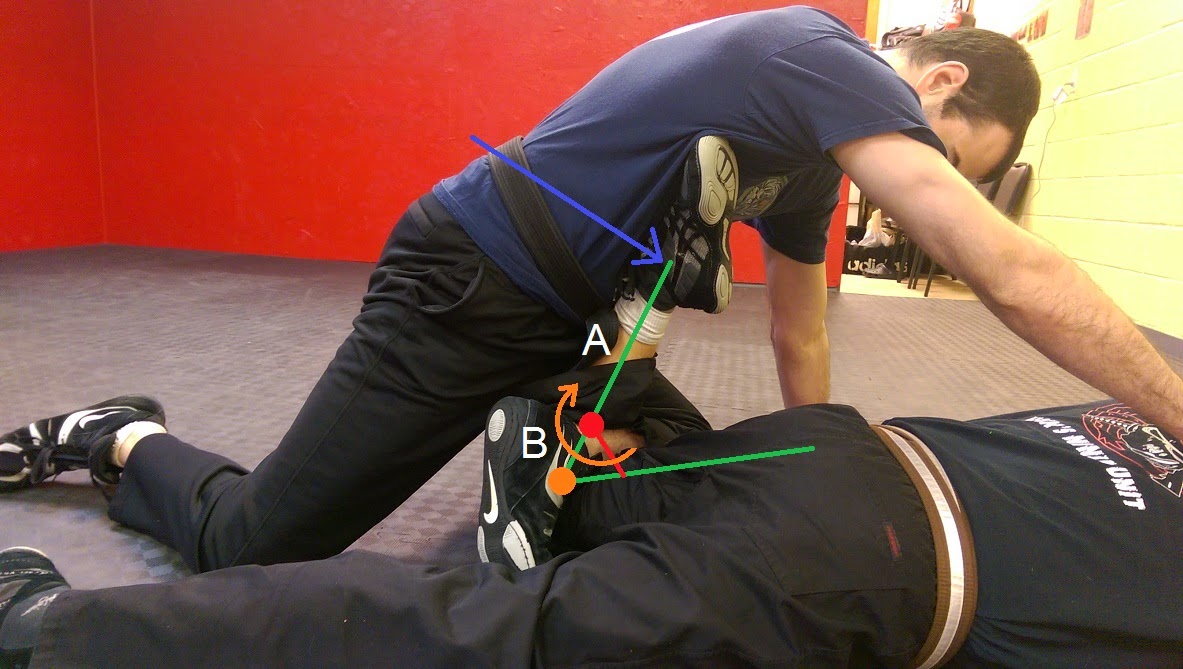 In the above picture, I've drawn in the important pieces for a compression lock.  The green base that is drawn over the upper leg isn't going anywhere because of the ground.  The blue arrow is the force I'm applying to the other green line.  My ankle is acting as a fulcrum for this lever.  The part labeled "A" is the part of the leg from the toes up to the point where my ankle is touching.  The part labeled "B" is the part of the leg from where my ankle is touching up to the knee.

When I apply the force with my ankle (or whatever) in there, it generates torque at the location of the fulcrum.  The longer I can make the "A" part by pushing my ankle closer to his knee, the more torque I can get out of the force I'm using.  One of three things is going to happen.
The situation you end up in is going to depend highly on the person you're doing the move to.  I've found that people with more developed muscles tap earlier because they just have more muscle to crush.  Those people also feel the pain earlier (in terms of angle of the knee or elbow) because the muscle is taking up more room, giving you more distance to apply the move while in "locked" position.

As a point of application, you want the fulcrum to be as wide and hard as possible.  You want it to be wide so the pain is felt earlier in the motion, giving you that increased distance.  You want the fulcrum to be hard because that increases the pressure (remember Pressure = Force / Area).  You also want the little triangle that your fulcrum and opponent's bones make to be as isosceles as possible.  For those of you who can't remember your geometry vocabulary words, that means that the two green parts of the triangle up in the picture are the same length.  This has the effect of getting the fulcrum to push into the opponent's body at a perpendicular angle, which means that you don't have to use muscles to keep it in place (yay vectors).

If you've never experienced a compression lock, then you may not fully appreciate all of the pain and muscle destroying goodness that these types of moves have to offer.  The concept is simple.  Just use leverage, pressure, and some basic vector math to crush a muscle against a bone.  Compression locks are not only effective on their own, but they also complement "traditional" joint locks extremely well because they work in opposite directions.  Try it out slowly (for the sake of your training partners) and see for yourself.
Posted by Unknown at 4:01 PM No comments: