Things have been on the busy side.  So, I'm going to have to keep this one short.  In my martial arts class this week, we focused on the arm drag.  We looked at the principles of the technique and a number of easy, yet effective, follow-ups to it.  The main idea we focused on was manipulating the opponent's balance and structure through controlling a limb.

In my absentmindedness, I forgot to get pictures and video to demonstrate the technique.  So, some YouTube video will have to suffice.

There's actually a lot of extra stuff in this video, but Billy Robinson is the man when it comes to CACC wrestling.  So watch at least from 2:00 to 3:00.

In a previous post, I talked about how force transfer applies to striking.  The same principles apply when you are trying to pull someone off of their balance.  Let's imagine, very simplistically, that your opponent is a tall triangle and that you're going to pull his or her right arm. 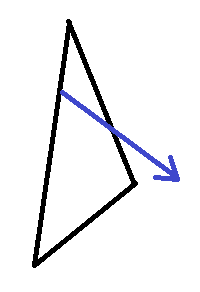 The base of the triangle represents the line between your opponent's feet.  As pictured here, for optimal unbalancing, you want to pull perpendicular to the base of the triangle because there is no structure with which to transfer that pulling force into the ground.  Instead the force is experienced as a torque.  The torque has quite a long effort arm because it is basically the distance from the opponent's shoulder to the ground.

If instead, you pulled parallel to the base, then the force could be transferred down into the ground, much like the way bridges work.

There are a lot of equations that could be used to describe the exact effect of a given amount of pulling force, but let's just get down to business.  You get a firm grip, you pull hard in a motion that takes the opponent off of his or her base, and they will be forced to step forward.  In that moment, you can get behind them, you could follow up with a variety of chokes, takedowns, and joint locks.  There is a bit of finesse in the way you twist and pull with your body though.  I find that if I wind up my body at the same time that I'm getting my grip, then I snap back to center, which is structurally ideal, then I get good results.

So, I presented a quick technique for you to try out...short and sweet.  This idea of pulling perpendicularly to the opponent's base is actually a fundamental concept in grappling.  Just look at some Judo throws to see the principle in action.  As always, generalize and apply.
Posted by Unknown at 6:58 PM No comments:

Pivot To Win It: A Tip For Kicking

As I've stated before, pivoting for certain kicks (round kick and side kick, in particular) is essential for proper execution.  Even after 5 years of Taekwondo, I found that I had to make some adjustments when I moved to a dojo that required shoes.  The extra friction was causing my foot to stick to the ground, preventing me from getting a good pivot.  This is an experience that I've seen happen to many students.  So, I'm going to explain a little trick, based in physics, to mitigate this problem.

As we all know (or should know by now), friction is the force that resists motion.  That includes spinning on your foot.  The formula for friction is f = mN, where m is the coefficient of friction between the two surfaces and N is the normal force exerted by the ground as the reaction force against the weight of the object (in this case, you).  So, when the surfaces change the friction also changes.  This is what happens when you go from being barefoot on a canvas mat to using rubber soled wrestling shoes on a vinyl mat, for example.  There's not much that you can do about the surfaces involved other than choose different footwear.  The thing you can control however is the normal force.

The normal force is equivalent to the amount of weight pushing on the ground at the time.  This is where the trick comes in.  If you take some of your weight off of the ground, then you can reduce the normal force and, therefore, reduce the friction you experience when you try to pivot.

So how do you take your weight off of the ground without turning every round kick into a cinematic flying kick?  The trick is to bend your knee quickly and briefly so that your weight actually falls, momentarily, toward the ground.  If you're not using the ground very much to hold you up, then it can't push back with a very big normal force, which reduces the friction.  In practice, I almost think of it as pulling my heal up towards my body without an accompanying upward jump.  As my foot pulls away from the ground, the friction is reduced.  Keep in mind, this is only for a fraction of a second...just long enough to finish the pivot, which should be fast anyway.  Here are some visual aids.

This particular trick is useful when performing a round kick or side kick when the ground and your shoes have a high friction coefficient.  This general idea of reducing the contact force to reduce the friction has all sorts of applications elsewhere in fighting, but that's for another time.  Happy kicking.
Posted by Unknown at 3:14 PM No comments: